X
This site uses cookies to provide and improve your shopping experience. If you want to benefit from this improved service, please opt-in. Cookies Page.
Accept Cookies
WINTER SALE On Now! Up to 25% Off
Same Day Dispatch & Fast Delivery
Call Us +44 161 974 0066
Rated as 'Excellent' based on over 9,000 reviews
20%
Off 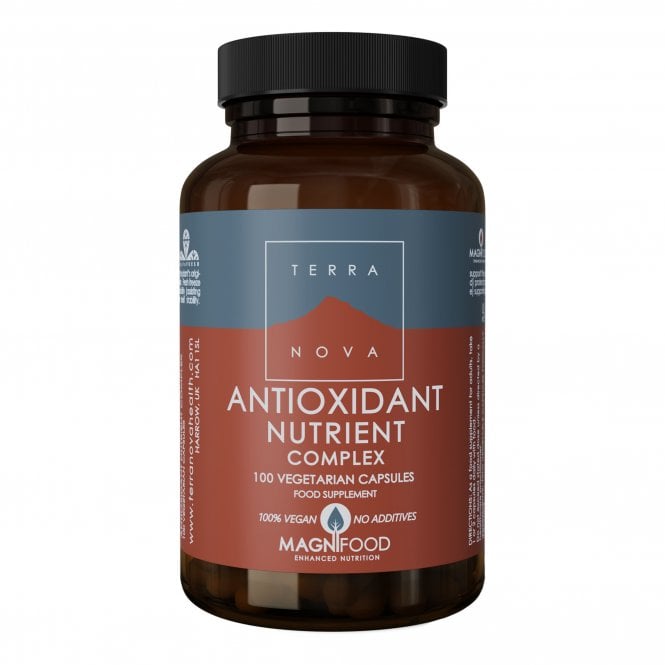 TERRANOVA Antioxidant Nutrient Complex is a comprehensive complex of antioxidant vitamins, minerals and other micronutrients, enhanced with highly active, whole and unadulterated superfoods and botanicals.

Barley grass is a source of the major antioxidant enzyme superoxide dismutase (SOD), as well as antioxidant vitamins, minerals and carotenoids.

The berries are among the richest natural sources of antioxidants nutrients such as vitamins C and E, as well as flavonoids, carotenoids (including lycopene, zeaxanthin and beta carotene) and coenzyme Q10 (CoQ10).

The root`s naturally-occurring curcuminoids are one of nature`s most potent free radical scavengers.

Acai is one of the highest ORAC (oxygen radical absorbance capacity) value fruits with signiificant levels of vitamin E and anthocyanin flavonoids, as well as containing coenzyme Q10. In fact, a 2006 study reported that acai had the highest ORAC value against superoxide radicals of any plant previously tested.

Blackberries are among the highest ORAC rated antioxidant fruits and a potent source of anthocyanin flavonoids.

This fruit contains numerous antioxidant compounds such as punicalagins, anthocyanosides, catechins and carotenoids - accounting for its high ORAC value.

Kale is a good source of many antioxidant compounds, with carotenoids and sulphur-rich sulforaphane and indole-3-carbinol being among the most important.

Each Terranova nutritional product is enhanced with its own synergistic complex of botanicals and phytonutrient-rich foods, called Magnifood. Magnifood ingredients are combined in a manner which enhances the body`s biochemical environment in order to maximise the potential benefits of the product`s vitamins, minerals and/or other nutrients. Many of the plants used in Magnifood are fresh freeze dried. Research shows that fresh freeze drying has the unique ability to retain a plant`s enzymes, and is shown to be superior to other drying methods in terms of activity, stability, solubility and preservation of a plant`s original fresh chemistry (as it was when the plant was harvested).

No Fillers, Binders Or Other Excipients

As a food supplement for adults, take 1 or 2 vegicaps daily with food. Do not exceed stated dose unless directed by a healthcare practitioner.

Not recommended during pregnancy or breastfeeding unless on the advice of a healthcare practitioner. Food supplements should not be used as a substitute for a varied diet.