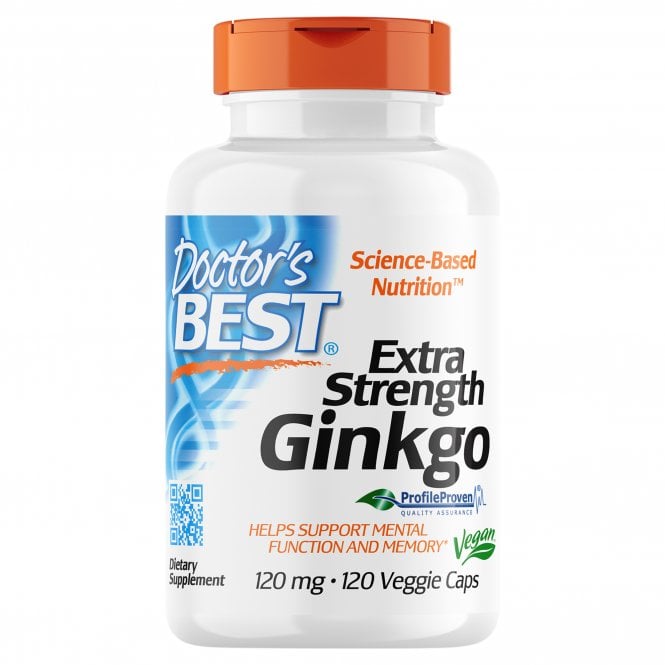 Ginkgo biloba extract is derived from the Ginkgo biloba tree leaf. Thriving on Earth for more than 200 million years, the Ginkgo tree is the worlds oldest living plant. Considered sacred in the Orient, Ginkgo was the only surviving tree near the epicenter of the Hiroshima atomic bomb blast. One specimen, planted near a Japanese monastery more than 1,000 years ago, is still alive today.

The Ginkgo biloba leaf is rich in phytonutrients, chiefly flavonglycosides and terpene lactones (ginkgolides.) In the extract, these bioflavonoid-like active ingredients are highly concentrated. Fifty pounds of Ginkgo leaves are used to yield one pound of extract.

Ginkgo biloba as a powerful antioxidant

Doctors Best was founded in 1990 with the idea to create nutritional supplements rooted in research. From sourcing top-quality ingredients to working with the best manufacturers in the business, their science-based approach to nutrition sets them apart.

Today, Doctors Best continue to uphold their founders belief that by trusting in science, good health will follow. They put in the work so you can thrive.

Take 1 vegicap once or twice a day with or without food. When taking two capsules daily, take one in the morning and one in the afternoon.

Still the best buy for memory and mental function. Dr. Best know how to package the product for better sales.

Extra Strength Ginkgo biloba leaf, great for the memory. I have been taking it for ten years now.

Arrived promptly. It is reputedly good for the brain and eyes. Early days yet. I`ve been happy with both Bodykind and Doctor`s Best on many occasions so I`m hopeful.

Fast delivery; excellent value for the price. I am a regular customer of bodykind as I am very satisfied with prices and quality of the products

Great product! I had tinnitus and was told I had to live with it but since taking this product, it is completely gone! And my hearing is back to normal.